Today was the perfect example of an autumn day in England. The sun was shining and the sky was blue with a scattering of clouds, but as soon as I left the house I had a “nope, I going to need a coat!” moment. The temperature seems to have dropped drastically overnight, I’m pretty sure there was a heat wave only a few weeks ago!

Pal and I decided to take advantage of such a lovely day, especially since the past week has been one storm after another with countless floods and weather warnings. I’ve been meaning to visit the local canal for quite a while and today seemed like a good opportunity to go for a little walk. So I charged up my camera, wrapped up warm and off we went! 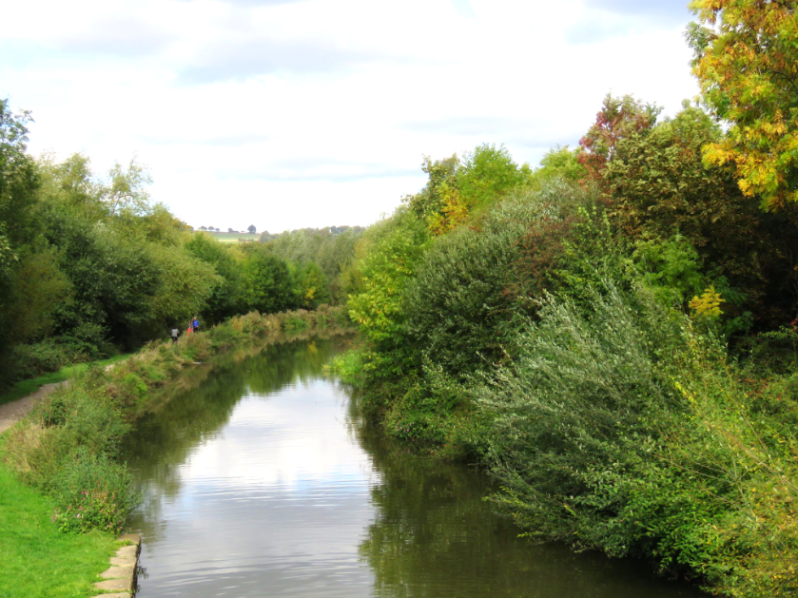 I’ve visited the canal once before, many years ago when I was still at school. I went with my grandparents and we took a trip on a narrow boat, which was very exciting! Unfortunately, there weren’t any boats around today, but there were plenty of dogs and that sort of makes up for it.

It looked so pretty in autumnal colours. The trees are only just starting to change colour and there are only a few leaves on the ground at the moment. In a few months time, I’m sure the water will be covered in leaves of all different shades. But for now, it’s the beautiful mixture of summery green with hints of orange and yellow.

We walked, talked and laughed, and said hello to the strangers we passed in true northern fashion. I was constantly on the lookout for a good photo opportunity. Pal studied media when he was at university, so he gave me a few tips and encouraged me to finally take my camera off of auto mode and see what it could do!

I had a lot of fun playing around with the different camera settings. I actually feel like I’ve learned a lot about my camera and the different things I can do. I still have a long way to go and so much to learn, but I’m still enjoying the process.

I recently bought a book about photography that explains a lot of the jargon and offers some good, practical advice. Hopefully I will learn a lot from it and see my photos getting better and better.

I limited myself to two duck photos because my blog is full of duck photos already! Pal stood on the edge of the water and pretended to throw food, which resulted in us being surrounded by a lot of hungry ducks! We found it quite funny how they seemed to appear from nowhere and land in front of us.

There were a couple of duck photos that didn’t make the cut. There was one that was eating the flowers of a plant on the edge of the canal, the other was foraging in the mossy water for food and had a line of moss across his beak from his efforts.

I found a ‘macro’ setting on my camera which is really useful when I’m trying to photograph small insects. I really like this photo because it seems softer than a lot of my other bee photos. He looks so furry and soft, although I wouldn’t really want to pet him! This is one of my favourite photos from today. I really like how the spider is silhouetted against the blue sky, even if it does make me shiver slightly!

We called this photo ‘the omen’ because it looks a little bit spooky and foreboding. It’s the sort of picture a character might see in a horror movie just before the killer bursts through the door. That one dark cloud just adds to the unsettling feeling. It wasn’t just bees and spiders though! I somehow spotted this little snail curled up on a leaf. He was probably the same size as the large end of a pencil, so I don’t know why he caught my eye. If you look closely, you can see his little eyes poking out from under his shell, probably wondering why there’s a camera in his face! The little moth stayed still for ages, almost like he knew I was trying to get a good photo! It gave me a lot of opportunity to test out different settings on my camera and see the different outcomes. I’m not completely sure if I like this photo or not, and if I had another chance, I would probably try and shoot from the front instead of the side. This photo very nearly didn’t make it onto the blog, the simple reason being that it’s too yellow! I edited it and decreased the saturation, so believe it or not, it was actually a lot brighter than this! I’ve blurred the plant slightly so it isn’t so bright, but I’m still not sure about it. I also tried it in black and white, but it didn’t really work and the photo lost it’s ‘life’ if that makes sense? Let me know in the comments if you like this one or not.

Pal took this photo of me on one of the bridges across the canal. He took quite a few and I was doing that awkward “what are you doing? Hurry up!” smile. We stood on this bridge and looked down at the water for a few minutes before turning back and heading to the car. In the future, I’d like to walk on past the bridge and see where the canal goes, but I’ll need some proper walking shoes for that I think!

That’s all for this blog post, I hope you liked it!